Notice: Trying to get property 'slug' of non-object in /home/sgumdev/public_html/wp-content/themes/sgum_2016/single.php on line 44

What's being teased in the new Exponential Tech Investor ads?

I’ve gotten a big pile of questions about the latest teaser pitch from Jeff Brown, who is now taking credit for the rise of the CRISPR stocks and sees another big surge coming.

And for what it’s worth, he was one of the early newsletter guys promoting the three primary CRISPR stocks a few years ago, when they all went public… though there was plenty of fanfare, and all three stocks (CRSP, EDIT and NTLA) still have plenty of fans.

This is what the shares have looked like since the three IP leaders in CRSPR became available for trading, you can see that Intellia has lagged the S&P 500 but Editas and Crispr Therapeutics (CRSP) have done quite well, especially in the past few months, though they’ve also had plenty of volatility and if you bought in 2018 instead of 2017, well, you’re not nearly as happy. Brown first teased EDIT back in March of 2016, when his newsletter was just getting started, and by late 2017 he was teasing all three stocks. 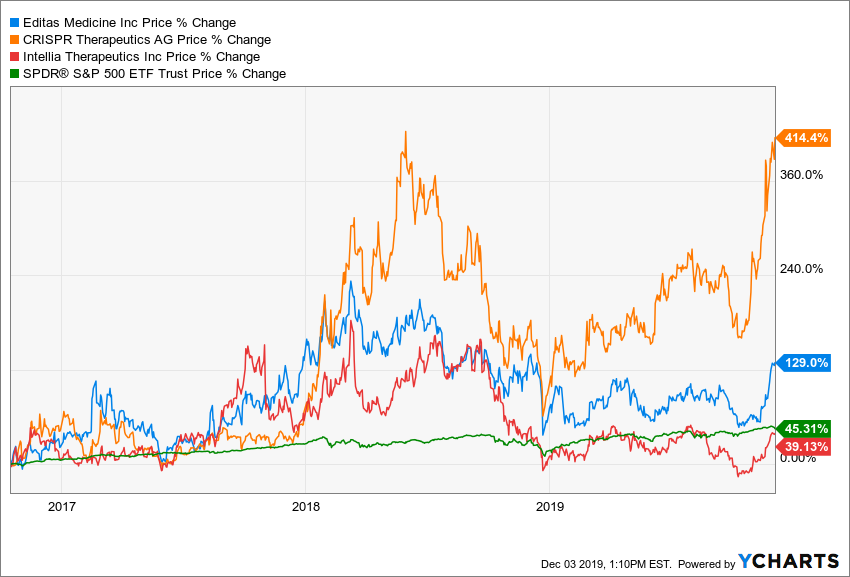 But what’s being touted now? The primary focus of his “God Key” promotion a few years ago was Editas (EDIT), mostly because it was winning some patent battles in court, but is he pitching that same stock again? He’ll spill the beans if you pony up $2,000 (non-refundable) for a two-year subscription to Exponential Tech Investor… but let’s see if we can ID the stock for you from the clues he drops in the ad…

He says that the FDA has given the “Cure” a green light, and the mainstream doesn’t realize it yet… and he says he knows this because he “saw something I wasn’t supposed to see” at a special closed-door meeting in Cambridge recently.

And what’s the “Cure” for? The most common sort of inherited blindness… so, yes, a big deal.

The ad, which as far as I can tell started running last week before Thanksgiving (that’s when we started getting questions), says that “when the market opens tomorrow at 9:30 am, this small cap, with the possible cure for blindness, could start to skyrocket too.”

He loads up on that, saying that there’s potential for “up to 10x gains in a single day” as this news comes out… which is pretty ridiculous, but far from the being the most ludicrous claim I’ve ever seen.

So will your financial life “change forever” if you make the “one move” he recommends in one day?

No, of course, not, but that doesn’t mean the stock can’t do well… so what’s the story?

This small cap “must make their announcement” and it’s “mandatory by law” according to the FDA.

So far, this technology is only known to work “in the lab” — conventional thinking says we’re five years away from it working in humans… but several key executives including the chief scientific officer were at this roundtable that Jeff Brown says he attended, and based on what they said he thinks LCA10, the most common type of childhood blindness, is on the verge of a cure. People could walk away from treatment with vision for the first time, with initial tests indicating that the will see with 90% clarity after treatment.

So will it “kick into high gear” and gain 1,000% in a day when this news comes out? did it already come out a few days ago and we missed out on that action? What’s the story?

He says the reason for the urgency is the “government document” he shares on screen, which is a file from clinicaltrials.gov with the ID number NCT#03872479, “A Single Ascending Dose Study in Participants with LCA10” that was reportedly “recruiting” as of October 28, 2019 for this trial of the drug AGN-151587, also known as EDIT-101.

Which, of course, means this is, yes, another pitch about Editas (EDIT) — that’s how they number their drugs, EDIT-101 being the first one they’ve worked on that is moving into clinical trials. The drug is actually being developed by Allergan (AGN), with Editas as a collaborator, so that’s why the primary name is AGN-151587.

And about this special document, Brown says “NO one has seen this before, I only just got my hands on it.”

And that it “brings to light” that the FDA has designated this “small-cap’s blindness cure” as an “IND,” which he says is a “very special designation” and “like a fast pass.”

Which is pretty silly, of course — this clinical trial plan was first filed back in March, and is publicly available for anyone to see right here.

And the FDA initially approved it as an IND over a year ago (that just stands for “Investigational New Drug”, meaning they got approval to begin testing it in humans” — that’s what makes a drug “clinical” instead of “pre-clinical” — no IND, no clinical trials, no human testing).

Is there some big news about EDIT-101 in the offing? Not particularly in the past week or so, nor is one anticipated in the next few weeks — they have been “enrolling” for the past few months, trying to find appropriate test subjects, and the first patient has now been screened to receive the drug… but the first dosing is expected “by early 2020” according to the latest quarterly update from Editas on November 12.

So what’s this rule from the FDA that requires news to come out soon? From what Brown says, it’s just that “they must report results” — and reporting trial results “sparks a special phase” of the biotech stock’s life cycle when the stock can surge dramatically higher.

Which is true, of course, reporting results is required for clinical trials if you want to keep advancing a drug toward eventual approval, and is a big deal for biotech stocks — they don’t trade based on financial data, they trade based on the performance of their drugs in clinical trials and, later, on the FDA’s decisions about whether their drugs can begin more trials or, eventually, receive approval to market the drug.

And Brown says “You have to make your move before the biotech reports to the FDA” — and I suppose that’s true, if you want to bet on them reporting good news in a particular clinical trial… but in this case, I don’t get the urgency. The first patient has not yet been treated with this experimental medicine, and the FDA won’t be receiving an update from this clinical trial for at least a few weeks (and that assumes they report something about this first patient in the days immediately after dosing and don’t wait for the “real” longer-term and multi-patient results, which rarely happens but is not impossible).

So yes, Editas is preparing to enter Brown’s “Stage 1” and could take off if they report great results from EDIT-101 in this first clinical trial… but it’s not going to be tomorrow, and it wasn’t last week. Yes, this small cap “must report to the FDA” as Brown says, but no, it’s not going to be “as soon as tomorrow at 9:30am” — they have to report results, but not before they have results, and since the first person won’t be dosed for probably at least a few weeks, and they are planning to dose 18 patients in this first trial, it’s going to be a while before we get any real clinical trial results.

What’s up with that bit about “tomorrow’s opening bell” and the urgency? It’s largely a sales tactic, I expect — particularly because it means the ad can work for a while, they didn’t cite a particular day on which the news will come, just “tomorrow.”

And Jeff Brown knows the expected schedule for Editas, of course, anyone who follows the company would know that they’ve been approved for a long time to move forward with EDIT-101 in clinical trials, but that the trial didn’t really begin enrolling until September and hasn’t yet seen the first dosing of a patient.

So take a deep breath, remind yourself that biotech stocks awaiting results can bring both massive gains and massive losses, and take your time to think it over when it comes to Editas — yes, EDIT has some impressive intellectual property, including the licenses to the original CRISPR patents. And yes, they are partnered with Allergan on a drug that is about to dose its first patient, and with Celgene on other projects, and could generate news in a matter of weeks if their first drug works in the first human subject… but that doesn’t mean the news will necessarily be good, or that the first patient to be dosed will be immediately cured of their blindness, and it could easily be months before we hear anything substantial about this first trial.

Editas is a pretty exciting company, but it’s not going to report Phase 1 results or rise by 1,000% at 9:30 tomorrow… so take your time, think it over, place your bets, and be prepared for a very volatile ride as CRISPR treatments reach their first patients and we see the first miracles (or the first disasters). If Editas posts life-changing gains for investors, as is certainly possible and has been predicted by several pundits (most growth stock or biotech newsletters that I’ve seen have recommended Editas and/or a basket of the CRISPR stocks at some point), it will probably be a long and bumpy road.

I don’t usually invest in early stage biotechs, mostly because of the impossibility of forecasting the economics of these drugs (let alone the probabilities of failure or success), but if I were dabbling in CRISPR I’d probably just buy a basket of the stocks (EDIT, NTLA, CRSP) and try to ignore them for five years. I know many of you delight in picking biotech stocks, though, so if you’re a fan or foe of EDIT, or have other favorites, please do let us know with a comment below. Thanks for reading!

Better to buy these kind of stocks when they hit the skids…BIIB being a good example and not chase them higher. Thanks for the update. There is no cure for many eye diseases and there is no way to get back to normal once you are stricken. Eye health should not be taken for granted, especially as we age. If the blind can be given some kind of sight, that will be truly amazing.

So the idea is to sign up for his newsletter before 930 tomorrow morning.

I had some ED I T calls in November 2017 which went up nicely from 22 to 33 and my notes show that it was an MMP push – though I can’t quite remember what MMP is money market press? Money Morning something? Well guess what EDIT is still sitting around $30…Besides I saw this after 4 PM so I can’t get in before 930 tomorrow morning LOL

CRISPR has huge potential but hyping a phase 1 clinical trial before a minimum of 10 patients are enrolled and treated is fraught with danger. The research looks enticing but mice are not humans. Take tiny bites of small biotechs for an investment gamble, if you can afford to lose it all.

Then Read up on Editas Medicines (EDIT), who is treating LCA-10 Genetic Blindness, and has dosed it’s first human. The process involves taking a DNA sample from the eye, editing it with the CRISPR method, re-inserting it back into the eye 30 days later, and within 3 days, the patient has 90% vision restored, all because of gene editing. And Beam Theraputics (BEAM) holds the patent on the CRISPR (CRSP) method. Soon this will be the way all disease is treated and cured.