Notice: Trying to get property 'slug' of non-object in /home/sgumdev/public_html/wp-content/themes/sgum_2016/single.php on line 44

Checking out the first wave of "best stock for 2019!" teaser pitches...

It’s the beginning of the year, and that means we’re going to see lots and lots of “top stock for 2019” pitches — so, naturally, your friendly neighborhood Stock Gumshoe will be trying to solve ’em for you.

There are two that caught my eye this Monday morning, the first was Alexander Green’s “No. 1 Stock for 2019” in ads for the Oxford Club — but that one turned out to be yet another slight variation of the “$3 stock trading under a secret name” pitch they’ve been running for six months about the “son of a police officer” who is ready to “shock the world” and provide you with a “single stock retirement”… so no need to write about that one, we’ve covered that same ad before and you can see our coverage here.

But the other one wasn’t immediately obvious, so I decided to dig a little deeper — this one’s from Tom Gardner at the Motley Fool, one of the founding Fool brothers who supplies half of the picks for their Stock Advisor service (brother David, the more “growthy” of the two, supplies the other half), the stock in question is teased as “Tom’s top pick for 2019,” available in a special report for those who subscribe to Stock Advisor ($99/yr).

Here’s the top part of the ad that caught our eye:

“Some members have more than doubled their money thanks to our recommendations of this stock, but we see an even bigger potential fortune ahead….”

And what other clues do we get about this one?

And, thankfully, they include a graph of the stock’s performance since the IPO — which usually helps us confirm the Thinkolator’s answer.

I must confess that I didn’t even realize there were 10 different Motley Fool services, but when I went to look it up they currently advertise 10 on their website, which doesn’t include some services we’ve covered before like their newer Marijuana newsletter… so I guess that means pretty much all the “regular” stock investing services they publish have recommended this stock.

Thankfully, though, they’re selling the cheap one — Stock Advisor is their entry level newsletter and usually the cheapest one they publish, so they’re not pitching the “upgrade” to one of their fancier products or packages that sell for anywhere from $999 to $8,500 a year. So that’s something.

So what’s the stock? Well, that’s not a lot of clues for the Thinkolator to chew on, but we do still have an answer for you: This is (again) Arista Networks (ANET), the emerging competitor to Cisco that provides a software-based switch operating system for cloud networks (that’s an oversimplification, but that’s how I like to imagine the business — they do sell hardware that competes with high-end Cisco stuff, but it’s the EOS architecture/software that differentiates their hardware and services).

And yes, though the other clues are a little skimpy, and mean we had to reference older teaser pitches for this same stock that we’ve covered to get a lead, we can confirm that the stock chart matches… this is definitely the pick. Here’s what ANET’s shares have done since the IPO, for what it’s worth: 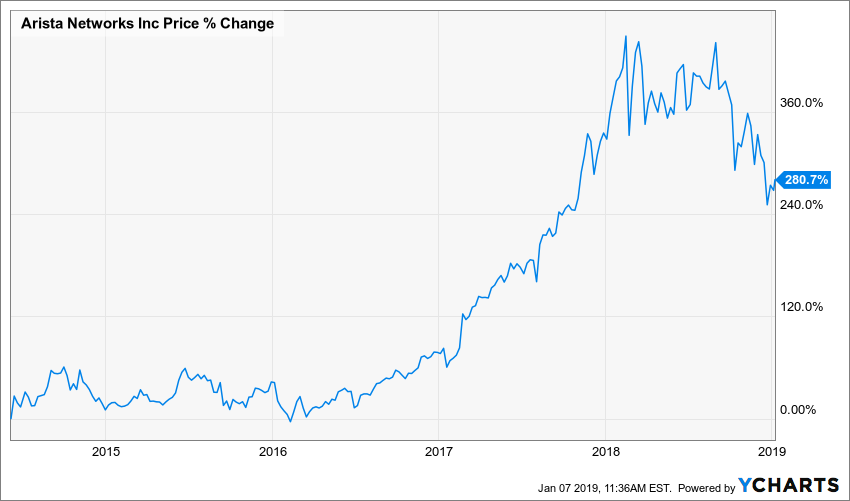 So it’s been a nice run for Arista, mostly in 2017 (the Fool’s first big promo that we saw for this stock was in September of 2017, so they probably missed most of that run… but the stock is still up a bit, if the first teaser we covered was accurate the stock was around $180 the first time they touted it).

Back in the Fall of 2017 the Fool was “betting” $280,240.56 on the stock, and when I last looked into a Fool pitch in the Fall of 2018 the number was $523,111… so I’m not sure why that bumped down to 523,059.77 this time around. Probably they just got more accurate… or perhaps they’re just claiming that the current value of their holding, not their cost basis, is the size of the “bet.” Still, that’s close enough for some extra confirmation (which we don’t need, since a stock chart ought to be about as unique as a fingerprint… but, well, sometimes I like to wear a belt and suspenders).

And this is a stock I’ve been watching personally, too, and finally began to nibble on last last year as it was falling… so it has fallen through my cost basis, though it’s a tiny holding so far and I’m likely to keep adding as it drops. Should I add some today?

Let’s see what’s going on with ANET now… the basic situation is that Arista Networks has a very expensive stock, but has had some phenomenal growth to justify the expense. Last year, both revenue growth and earnings growth rates came down substantially from the 2017 highs that spurred the first crazy surge in ANET shares… but it’s still growing revenue most recently at 28% year over year, and earnings per share at 22% (that earnings growth looks tepid, but it’s partly because the earnings a year ago were so high — the average earnings growth over the past three years is about 60%).

The stock did get a bit of a boost today, though that’s being credited not to Tom Gardner but to Morgan Stanley boosting it to “overweight.” There won’t be any big news until next month, most likely, since they don’t report their fourth quarter until February 15. Analysts are expecting the growth to continue to moderate — they see ANET finishing 2018 with $7.76 in earnings per share, followed by $8.89 in 2019 and $10.35 in 2020. So that’s 33% earnings growth over the next two years, averaging out to something like mid-teens annual growth.

That’s pretty good, and you can make a case for paying 24X forward earnings for a stock that’s growing earnings at 16% a year… that’s a PEG ratio of about 1.5, which is firmly in the “reasonable” camp most of the time — but it’s certainly not as exciting as 60% growth, so you can see why some of the bloom came off the rose as the market for high-growth stocks fell apart late last year.

(That’s not completely fair — PEG ratio is generally calculated as the forward PE ratio divided by 5-year average annual earnings growth rate estimates, and I’m just using two-year estimates, but that’s all I’ve got at hand at the moment… by way of comparison, Ed Yardeni currently notes that the S&P PEG ratio has fallen below 1.0 for the first time since 2011, and has averaged about 1.25 over the past 20 years or so… the tech sector has a PEG of about 1.0 right now, near a five-year low).

But there’s something to be said for a massive secular growth wave, even if it feels like the broader market might be coughing for oxygen a little bit — and cloud computing and data centers in general are still in a huge growth wave, thanks to the constantly expanding avalanche of data that rushes at all of us, every moment of every day. And that’s big picture growth, which spurs more demand for the equipment that powers the innards of the internet and causes new data centers to be built and old ones to be constantly upgraded, seems like to only be accelerated by 5G adoption (next-generation wireless) that will bring more demand for more data transmission.

I don’t think the end market is going to stop growing or stop upgrading anytime soon, and Arista is still very small compared to the size of the market — and while their market share is climbing, it’s still in the single digits and the gross margin and operating margin don’t show any sign of declining, which indicates to me that there isn’t any worrisome price competition at the moment.

So yes, I’ll add a little more to this position now as we rev up for another year. This remains a small holding in the Real Money Portfolio, but now it’s a little bigger than it was when I first opened the position a month ago.

The Fool tends to cover its favorite picks with lots of free articles, as well… so there’s a lot to read from other Fool writers about ANET if you’d like, including this note following the last earnings release (they beat estimates again, as they have every quarter for years), and this one comparing ANET to CSCO just last week. The transcript from their latest conference call is here (presentation slides here).

And that’s just the work of the Thinkolator and some opining from yours truly, so that’s what I’m doing with my money… but with your money, of course, it’s your opinion that matters. Whaddya think? Ready to jump in on ANET after it has slowed down and grown into its valuation a bit over the last year? Still too expensive? Think they’ll get clobbered by Cisco in the end? We’d love to know what you think, so please share with a comment below… thanks for reading!

Warning: in_array() expects parameter 2 to be array, bool given in /home/sgumdev/public_html/wp-content/plugins/subscribe-to-comments-reloaded/wp_subscribe_reloaded.php on line 1540

Warning: array_flip() expects parameter 1 to be array, bool given in /home/sgumdev/public_html/wp-content/plugins/subscribe-to-comments-reloaded/wp_subscribe_reloaded.php on line 1544

Warning: in_array() expects parameter 2 to be array, null given in /home/sgumdev/public_html/wp-content/plugins/subscribe-to-comments-reloaded/wp_subscribe_reloaded.php on line 1547

Thanks Travis for a fantastic Post. ANET is a great stock if we are willing to hold for 5+ years (better 10+). The rate at which Cloud computing is taking over the world is breathtaking. Smartphone penetration at emerging markets mean more and more people consume content (via Youtube, Netflix, Prime or local equivalent) – and all these get streamed from the Cloud. ANET is a strong hold.

Bought in to MJNA stock at about .11 cents, has ben up and down. Any comments on this stocks future?

Warning: in_array() expects parameter 2 to be array, bool given in /home/sgumdev/public_html/wp-content/plugins/subscribe-to-comments-reloaded/wp_subscribe_reloaded.php on line 1540

Warning: array_flip() expects parameter 1 to be array, bool given in /home/sgumdev/public_html/wp-content/plugins/subscribe-to-comments-reloaded/wp_subscribe_reloaded.php on line 1544

Warning: in_array() expects parameter 2 to be array, null given in /home/sgumdev/public_html/wp-content/plugins/subscribe-to-comments-reloaded/wp_subscribe_reloaded.php on line 1547

Author/Editor: Dave Gardner, Tom Gardner
Publisher: Motley Fool
Edited by the Gardner brothers, with one stock pick from each per issue.

Checking up on the latest Motley Fool Stock Advisor ads...

Fool’s “One Stock for the Coming Marijuana Boom”

“Motley Fool Triples Down on ‘Millionaire-Maker’ Stock” — which one?

What's the latest "double down" teaser from Motley Fool Stock Advisor all about?

What's being touted as the Fool's biggest bet for Stock Advisor subscribers?

We use cookies on this site to enhance your user experience. By clicking any link on this page you are giving your consent for us to set cookies.