Notice: Trying to get property 'slug' of non-object in /home/sgumdev/public_html/wp-content/themes/sgum_2016/single.php on line 44

This teaser solution first appeared in the Friday File on December 20. It has not been updated or revised, Irregulars can see the original here if they prefer. The ad has not been in heavy circulation since we originally covered it, but I thought non-Irregulars might find it interesting.

The teaser that some folks have been asking about is from Radical Wealth Alliance, edited by John Persinos ($2,495 “on sale”, no refunds), and it promises that this idea will let you…

“Legally ‘ROB’ Every Weed Company in America with a Single Click”

Sounds like fun, right? There’s lots of imagery about an armored car robbery, and huge bags full of cash, but it’s pretty much just all about the fact that banking is a huge problem for US marijuana companies — since marijuana is still a DEA Schedule 1 drug and still illegal under federal law, pot companies can’t access a full suite of financial services… partly because the big banks don’t think it’s worth the risk in that legal grey area, and partly because it’s genuinely illegal and a major challenge, particularly for banks that operate across multiple states.

And, as pot traders are certainly aware, Congress also knows this is happening… after all, representatives from 33 states have marijuana businesses in their district that are frustrated that they can’t get regular bank loans or take credit cards and deal in massive piles of cash every day, which is a logistical and security challenge that spills over into the rest of the neighborhood and community (nobody wants to live and work next to a robbery magnet).

Here’s a bit from one of the lead-ins I saw to this ad:

“How an Idaho Eagle Scout is about to unleash a historic weed windfall…. Idaho native Mike Crapo doesn’t tie knots like used to… but starting on January 17, he could un-tie America’s #1 worst outdated law with a single swipe of his pen. After all, Mike is a Senator, and a key one at that. He’s the swing voter who just LEAKED to Politico he would personally sign off. Our full analysis shows he’s set to sign on January 17 — opening a one-time profit window to grab an insane $141,625 in fast cash.”

Persinos implies that as soon as the banking world gets the green light to work with pot companies, there’s one bank that’s going to get most of the business…

“Once this monumental law passes, every marijuana company in America will finally be able to open bank accounts and access normal banking services, like any other business….

“In other words, the surge of new banking activity among marijuana businesses once this law is signed won’t be a trickle…

“That means any bank that’s in position RIGHT NOW…

“Will start pumping all this money in, hand over fist.”

It won’t surprise you to hear that this all-or-nothing stuff is a bit of an exaggeration, there are lots of banks, including Bank of America among the big interstate operators, that are offering at least some financial services to marijuana companies. Yes, the sector is under-banked, but it has gradually improved over the past few years.

There have also been plenty of smaller banking companies that have tried to fill the void, to take advantage of the opportunity in marijuana-related banking services, like First Green in Florida… but we’ll stipulate that it’s still an iffy thing, despite the gradual improvement (and First Green dropped out of the marijuana business when it got acquired by the more conservative Seacoast Bank, just to reinforce that point).

But presumably lots more banks will try to rush in when things are legalized, and probably some of the first movers will have an advantage if they know how to deal with marijuana businesses and how to assess risks and business models in this space… so which bank is Petrinos talking about? Let’s start to look at some clues about this one bank that he says is “perfectly positioned to claim the lion’s share”…

“That’s only the opening shot.

“They also now have agreements with CannTrust Holdings… Organigram… and Auxly Cannabis Group.

“All it takes now is ONE last slam-dunk Senate signature, and all of these companies already know who the ‘best bank in town’ is – because they’re already in business together.”

The urgency is all about this bill getting out of committee, apparently…

“Neither is Mr. Morals, our Vice President Mike Pence. (Because with 51 votes he is not needed as a tie-breaker.)

“This is the part today’s media morons don’t understand.

“The rules of the Senate are complicated. The single missing vote isn’t the 51st vote in the Senate. That one’s in the bag — we just saw.

“It’s the tiebreaking vote to get the bill out of the Senate Banking Committee… which would then automatically trigger the win.”

That vote, presumably, is Senator Crapo’s as the Chair of that Committee, and his interview with Politico was widely reported back in September, when he voiced an interest in getting to a vote before the end of the year if he could get the modifications he wants to the House Bill. There’s a somewhat more detailed update to that from October here from the perspective of the marijuana business sector.

So sure, it might be that a compromise is reached and the bill goes through in some fashion… though if you think Senators are going to go out on a limb and push back against Mitch McConnell if he doesn’t want the bill passed, you should prepare for the real possibility of disappointment. We have no idea what will be happening in the Senate once the impeachment trial gets under way, assuming that happens early next year, or what kind of disarray we might see if there’s any lack of cohesion in the Republican Party in the next month or two. I would hesitate to predict that anything is going to get done anytime soon, though it seems very likely that something like the SAFE banking act will pass eventually.

And we’re told that “$20 is plenty to get started,” which usually implies that the share price is somewhere in that neighborhood.

But according to the rest of the clues, $20 definitely won’t cut it for this particular investment — you’ll need about $80 to get started, because all the clues point the Thinkolator directly to one teaser solution: Bank of Montreal (BMO).

And yes, BMO has been among the more aggressive Canadian banks in offering debt financing to marijuana companies, as well as providing investment banking and other services. This PotNetwork article runs down how it precisely matches all those specific funding clues.

And though there’s no chance that it’s going to provide you with 200% gains in January, at least using the common stock, it is a pretty reasonable investment — it’s trading at a little bit of a discount to its big Canadian peers like Toronto-Dominion (TD) or Bank of Nova Scotia (BNS) when it comes to price/tangible book (1.7 for BMO, versus 2.1 for TD and 1.9 for BNS), and it has a decent return on equity and pays a solid dividend of about 4%.

Most North American banks are still pretty cheap these days, other than JP Morgan (JPM), and Canadian ones are no different — some of that is probably because confidence in Canada’s economy is not so high right now, particularly the real estate market that is always very tied in with banking, but BMO has been around for 100+ years and will probably be just fine in the end… it hasn’t done much in the past few years, and it’s so big (market cap of $50 billion) that I imagine it would be pretty hard for the marijuana business to really move the needle.

Over the past decade, Bank of Montreal has been, well, about average… in its peer group (“big Canadian banks”) it has done better than Bank of Nova Scotia (BNS), and worse than Toronto-Dominion (TD) — the returns are actually pretty similar to Citibank’s (C) returns since the end of the financial crisis.

Put another way, it has done about twice as well as the average Canadian stock, (measured by the iShares MSCI Canada ETF (EWC)) and about half as well as the S&P 500. J.P. Morgan (JPM) is pretty much the only bank that has outperformed the S&P 500 over the past decade, so BMO has plenty of company in that ‘average’ category. Here’s a 10-year total return chart if you’d like to visualize that — BMO is the light blue fella in the middle of the pack: 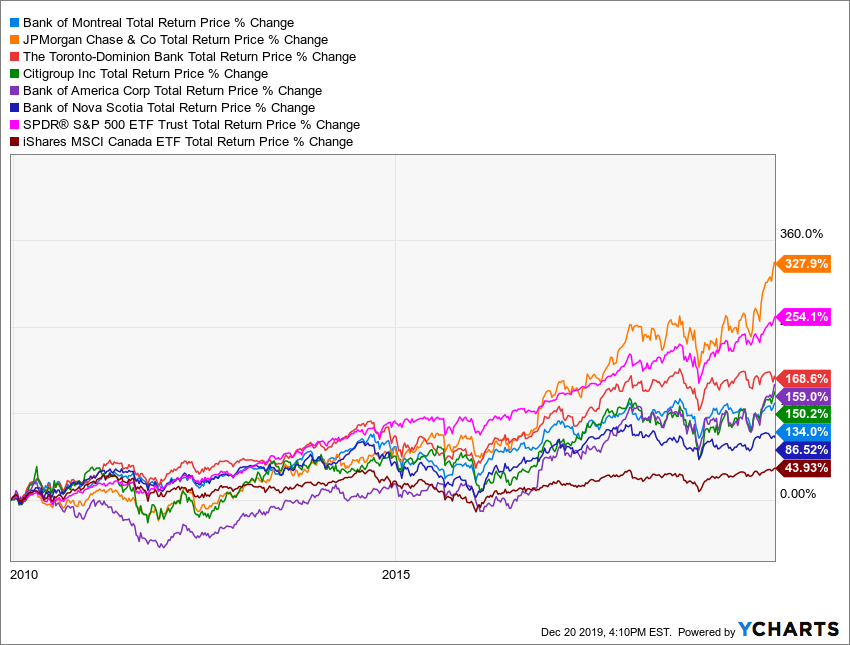 Right now the sentiment seems to be that Canada will be able to avert a recession and just slog through some slower growth for a year or two, though the housing bubble that most of urban Canada saw over the past several years certainly could cause a bit of a kerfuffle if it pops violently instead of deflating. Certainly BMO knows the score better than I do when it comes to the Canadian economy, so it’s not like this will come as a surprise to them or any of the big four Canadian banks.

At the moment analysts are penciling in about 5% earnings growth next year for BMO, and you do get that 4% dividend which will almost certainly continue to grow (probably slowly), so at 11X earnings that’s not crazy… it’s just that it’s probably not going to generate marijuana riches for you in a matter of months, so if you want to become a BMO investor you’ll have to reset your expectations and not be too hung up on this John Persinos rose-colored glasses forecast.

I’ll leave you with one final bit of context here, just to help with the removal of those rose-colored glasses: Yes, those deals that they list (I call them “clues”) with various marijuana companies, if you add them up, probably total close to a billion dollars. Yes, that’s a lot of money… and yes, Bank of Montreal only has a market capitalization of about $50 billion, so maybe that’s a meaningful chunk?

Not so fast… Bank of Montreal, like all banks, is very levered — the loan book is far larger than their market cap. So BMO’s total loan book is probably about C$450 billion, and as of earlier this year (last time I checked) the total business and commercial loan book, which is where most of those lines of credit for marijuana companies would fall, was about C$230 billion. So yes, a billion dollars (I’m rounding here) lent out to pot companies is a lot of money, and that might be a nice growth opportunity on the margins for them… but right now it’s about a half of one percent of BMO’s business loan book.

And, of course, being the favored lender for pot companies might give you a little bit of a “first mover” advantage in booking new business once banking is opened up for pot companies in the US (assuming the SAFE banking act or something similar eventually passes)… but money is fungible, lending is lending, and other big banks would almost certainly catch up quickly.

Kind of a buzz kill, eh? Sorry, they’re just teasing a big ol’ semi-boring Canadian bank. Take it and do what you will…

Is this the whole Friday File?

No, the second installment of the annual review is coming… just a bit late.

What’s this “One Stock for the First Addiction-Proof Cure for Pain?”

What's Radical Wealth Alliance teasing as the stock that will kill opioids and reap huge profits on February 25?